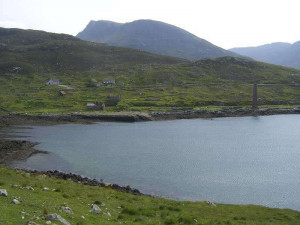 On the shore of Loch a Siar, stand the ruins of a whaling station.  All that can be seen from the road is the large square brick  Boiling Chimney.

Bunavoneader Whaling station dates from the early 1900’s and was set up by a Norwegian Family, who had contacts with the Norwegian Whaling Fleet.

On the ground it is possible to view concrete foundations and floors of the old sheds and ancillary buildings.  On the shoreline are the remains of the jetty and slips used for hauling out the whale meat.

Once processed, the whale products were shipped off to Glasgow and the returning ships brought back fuel and supplies for the whaling ships.

Lord Leverhulme bought the Whaling Station from the Norwegians in the early 1920’s and it remained in the Lever organisation until 1929, when it closed until re-opening again in the 1950’s but only stayed open for a few of years.

View Isle of Harris in a larger map